Being a frontrunner in Saturday’s Low-E Insulation Feature was a dangerous game with the Xtreme Outlaw Sprint Car Series and POWRi WAR Sprint Cars. For some, it spelled disaster; for others, it spelled glory.

At only 30 laps in length, the non-wing portion of the Jason Johnson Classic at Lake Ozark Speedway saw countless comers and goers throughout. In total, a staggering 11 different drivers at one point or another held a top-five running position.

In the end, CJ Leary of Greenfield, IN played his cards the best aboard the Michael Motorspors #77M. After leading the opening 12 laps, Leary faded as far back as fourth and appeared out of the picture until the tables and the track turned. He avenged earlier contact with Robert Ballou by driving by the 17th-starter on Lap 27 and clutching up late in the going to score the $5,000 victory.

“Sometimes being the leader isn’t always the best, and I think that was the case tonight,” Leary noted. “I think Brady had the car in the Feature, he could run where I and anyone else couldn’t. When he spun out, I knew the whole race changed. Robert and I had a spirited battle there and it was fun. It feels good to put Bill Michael and this Kodiak Products #77M back in victory lane.” 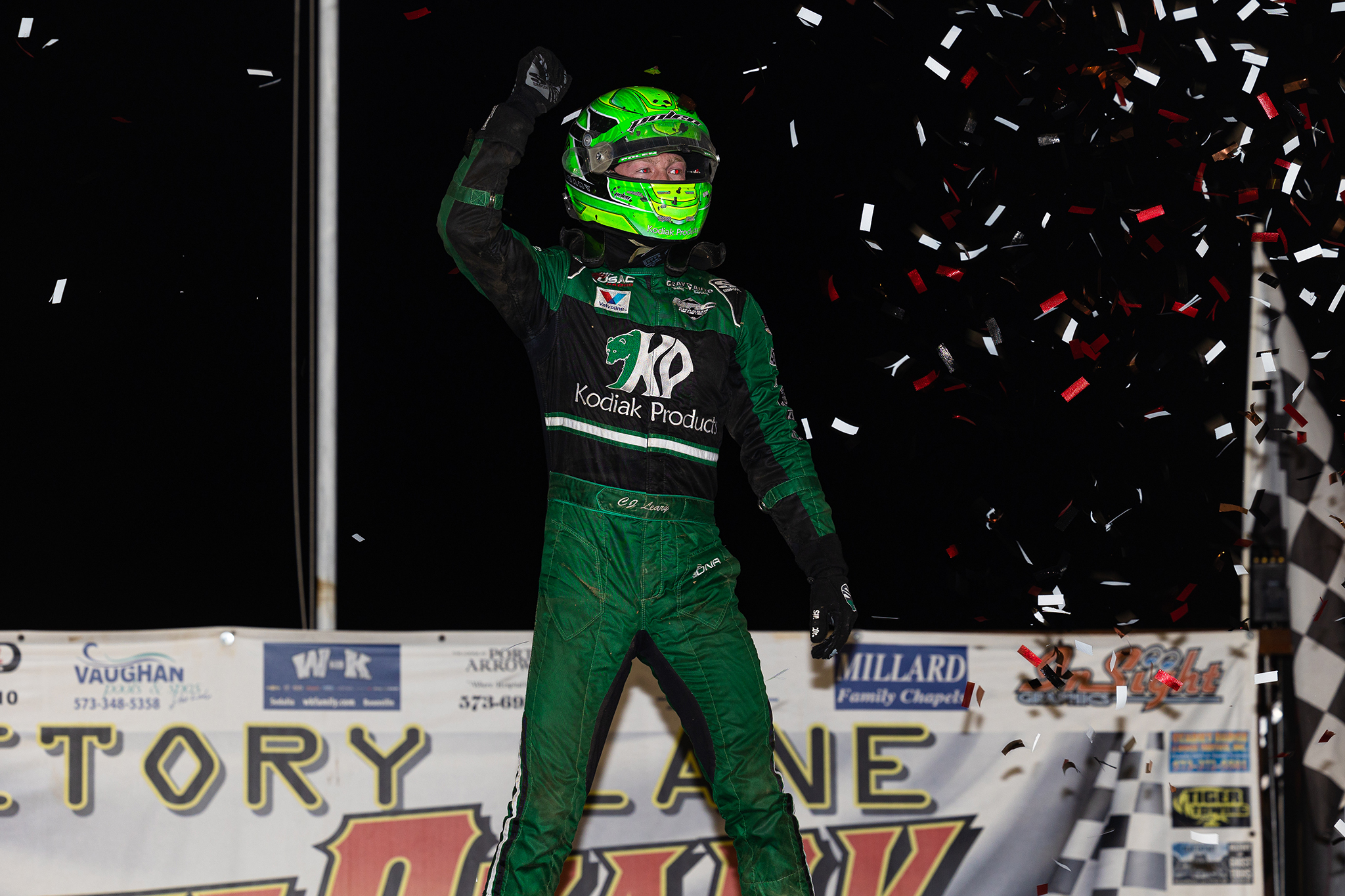 The first half of the Xtreme / POWRi Feature went quickly with Leary leading the first 12, and then fifth-starting Brady Bacon taking the Wedgewood #98 to the point on Lap 13. Chaos soon broke out as a trio of leading contenders dropped out with Mario Clouser (3rd) of Auburn, IL suffering a flat right rear, Carson Short (4th) of Marion, IL flipping over after contact with Ballou, and Alex Bright (5th) of Collegeville, PA finding the wall & landing upside down.

More wildness ensued as 17th-starting Robert Ballou entered the picture and looked to pull off a massive win from deep in the field. The Mad Man was pressuring Bacon for the point when the Broken Arrow, OK native looped the #98 and brought out the final caution on Lap 22, putting the lead directly into Ballou’s hand.

It looked like the #12 had the checkered flag in his bag, but Leary’s #77M returned to form and the non-wing ace simply aced the restart when it mattered most. He snuck underneath Ballou on Lap 27 down the backstretch and drove away to a margin of victory at 0.849-seconds.

Ballou’s +15 run to a runner-up effort easily earned him TJ Forged Hard Charger honors, and capped off a crazy night for him. He was disqualified after winning his Heat (did not report to scales), then won the K1 Race Gear Last Chance Showdown from 12th, and almost won it all from 17th.

“When you piss off the bull, you get the horns,” Ballou said on his aggressive driving style. “I’ve raced with CJ quite a bit over the years and there have been some good ones and bad ones. I kinda squeezed him into the wall, but I had to lift so I didn’t wreck both of us. He was just too good at the end. I was a sitting duck out there and I didn’t move down in time to stop him.” 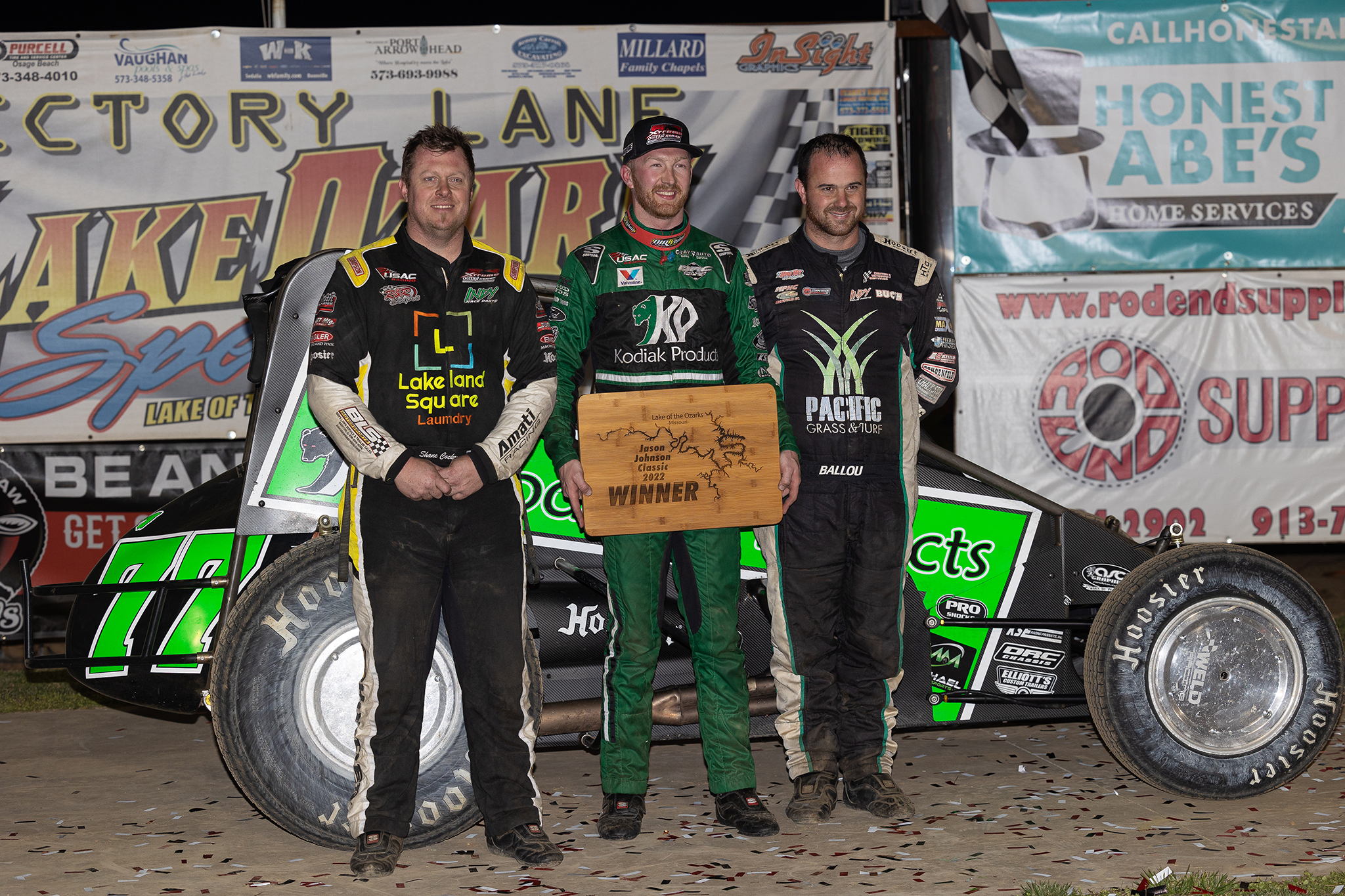 Shane Cockrum of Marion, IL finished in third, earning a season-best result for car owner Shane Wade and crew chief Davey Jones in the Amati Racing #66. One of the 15 originally committed championship contenders, Cockrum now sits third in the point standings behind Leary and Ballou through three of 13 races.

“I honestly thought through the middle parts that we were the car to beat,” Cockrum commented. “I lost some momentum on that last restart and kind of took away our shot. It takes a night like this to turn things around, and I’ve got full confidence in this group. I can’t thank these Amati Racing guys enough for taking a chance on me.”

Matt Westfall of Pleasant Hill, OH drove forward to a season-best fourth-from-12th in his #33M. Rounding out the top-five was Broken Arrow, OK native Jason McDougal, who was as high as third at one point, in his first run aboard the Keith Kunz/Curb-Agajanian Motorsports #67 Sprint Car.

UP NEXT (May) – The Xtreme Outlaw Sprint Car Series presented by Low-E Insulation will have another two months off before resuming the inaugural season on June 10-11 back at Lake Ozark Speedway in Eldon, MO. Before then, the Xtreme Outlaw Midget Series presented by Toyota Racing will debut with a special Millbridge (NC) Speedway doubleheader on Monday & Tuesday, May 23-24.

PrevPreviousFriday’s Event at US-36 Raceway Cancelled Due to Temperatures
NextWHO TO EXPECT: Xtreme Outlaw Midget Series Debuts on Monday and Tuesday at MillbridgeNext