Working alongside his parents at their family-owned plumbing business, Chase McDermand had dreams of own his career path.

His vision was that of a full-time national dirt Midget racer.

In 2023, he’s expanding upon that dream. Back behind the wheel of the #40 for Mounce/Stout Motorsports, McDermand will run full-time with the Xtreme Outlaw Midget Series presented by Toyota – along with others – and has his sights set on a national Midget championship.

The 2022 season marked his first true venture into national Midget racing, making more than 50 starts across Xtreme Outlaw, USAC and POWRi competition. In that span he earned three victories, including his first Xtreme Outlaw victory at Davenport Speedway – in conjunction with POWRi.

“That was awesome,” McDermand said about his Xtreme Outlaw victory. “I haven’t been racing national Midgets that long. This is really my first year. To get a win at all is cool, let alone it being [the Xtreme Outlaw Midget’s] first year, too.

“It was cool to be a part of the atmosphere, something new in the Midget world, gets a lot of attention. It was nice to be a part of that in a positive way. For our team, also. It was great to give them another national win. It was special for all of us.”

McDermand, of Springfield, IL, started racing when he was 11 years old, running Quarter Midgets for three years before climbing the ladder to Lightning Sprints, then D2 Midgets and then running with the Badger Midget Auto Racing Association.

With a vision of making it to the national level, he didn’t wait for someone to discover him. He took it upon himself to start knocking on doors. Eventually, Jay Mounce and Gavin Stout opened theirs for a conversation.

“I didn’t know them at that time in 2021,” McDermand said. “I never talked to them in person until we started messaging back and forth about racing together.”

Now, they’re like family, McDermand said. That chemistry is what he believes led to their success in 2022 and will lead to more in 2023.

“Working well together and getting along, that promotes more chemistry,” McDermand added. “And with chemistry it will bring success later.”

While they had success, 2022 was still a learning year for him. Learning new tracks. Learning new clay. And learning how to contend with drivers who have been on the national tour for years. None of it scared him away, though. It only made him more excited for what’s to come in 2023.

“I’m really looking forward to Pennsylvania,” McDermand said about the 2023 Xtreme Outlaw schedule. “I kind of missed out on PA stuff because [other series] quit going there when I started. So, I’m excited to go there. Those tracks look awesome. Looking forward to going back to [Federated Auto Parts Raceway]. There’s a track in Southern Illinois, Red Hill Raceway, my sister used to live down there and we always drove by that place, and it was abandoned at the time. It’s crazy that we’re now racing there.”

McDermand still works full-time at McDermand Plumbing and will continue to next season. While it’s a challenge juggling his dream and his job at times, he said, it’s an opportunity he cherishes. His parents, Kevin and Shelley, have been by his side every step of the way.

“Really fortunate to one, get the time off,” McDermand said. “I think we had 60 days I had to take off this year. Thanks to my parents for letting me do that and live out my dream.

“(My dad goes to) mostly every race, I think he missed a few because of work. But me, my mom and our dog, we’re at every race. I don’t think my mom has ever missed one.”

If you can’t make it to the track, you can watch every Xtreme Outlaw Midget Series race live on DIRTVision. 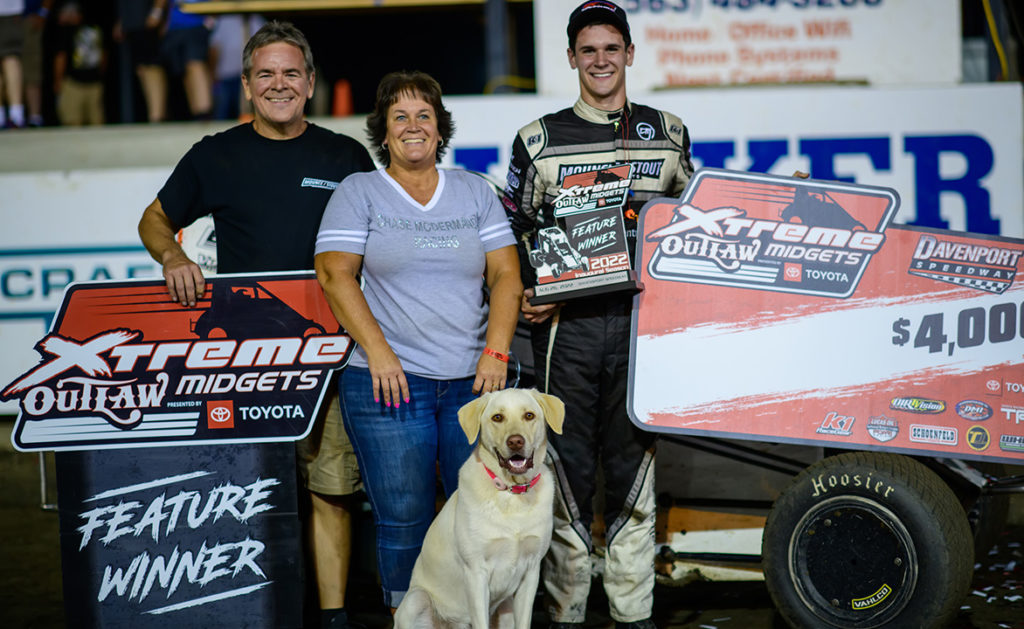