The Xtreme Outlaw Midget Series presented by Toyota continued to burst onto the national scene Wednesday night with an extraordinary 40-lap finale to cap off the inaugural event at North Carolina’s Millbridge Speedway.

From new track records and jaw-dropping stunts in lap traffic to daring sliders for the lead and late-race drama, this midweek showdown outside Charlotte’s Queen City had it all for the faithful fans in attendance and the diehard supporters on DIRTVision.

Officially, the box score shows a nearly perfect night for Cannon McIntosh of Bixby, OK, but the 19-year-old pilot had to fend off some ferocious phenoms behind him to capture the second-ever win in Series history. The likes of Larson, Boschele, Crews, Reimer & Wiedeman all had their names in the hat, but none could stop the Dave Mac/Dalby Motorsports, Crescent Tools, GEARWRENCH, Spike/Toyota #08 from taking the $5,000 loot.

McIntosh earned the pole position of the 40-lapper with a 33-point performance for going QuickTime in his Whitz Racing qualifying group and winning his Toyota Heat Race from fourth. His first of many battles was the race into turn one with outside polesitter Bryant Wiedeman eyeing redemption from Tuesday after leading 21 laps before being spun around from the lead.

He survived that dual and promptly controlled the first half with ease, but then the cross flags flew, traffic became a factor, and the real battle begin. Local teenagers Gavan Boschele and Brent Crews entered play and made McIntosh earn every ounce of his win as the trio set a torrid pace with daunting moves around every corner amid the backmarkers. 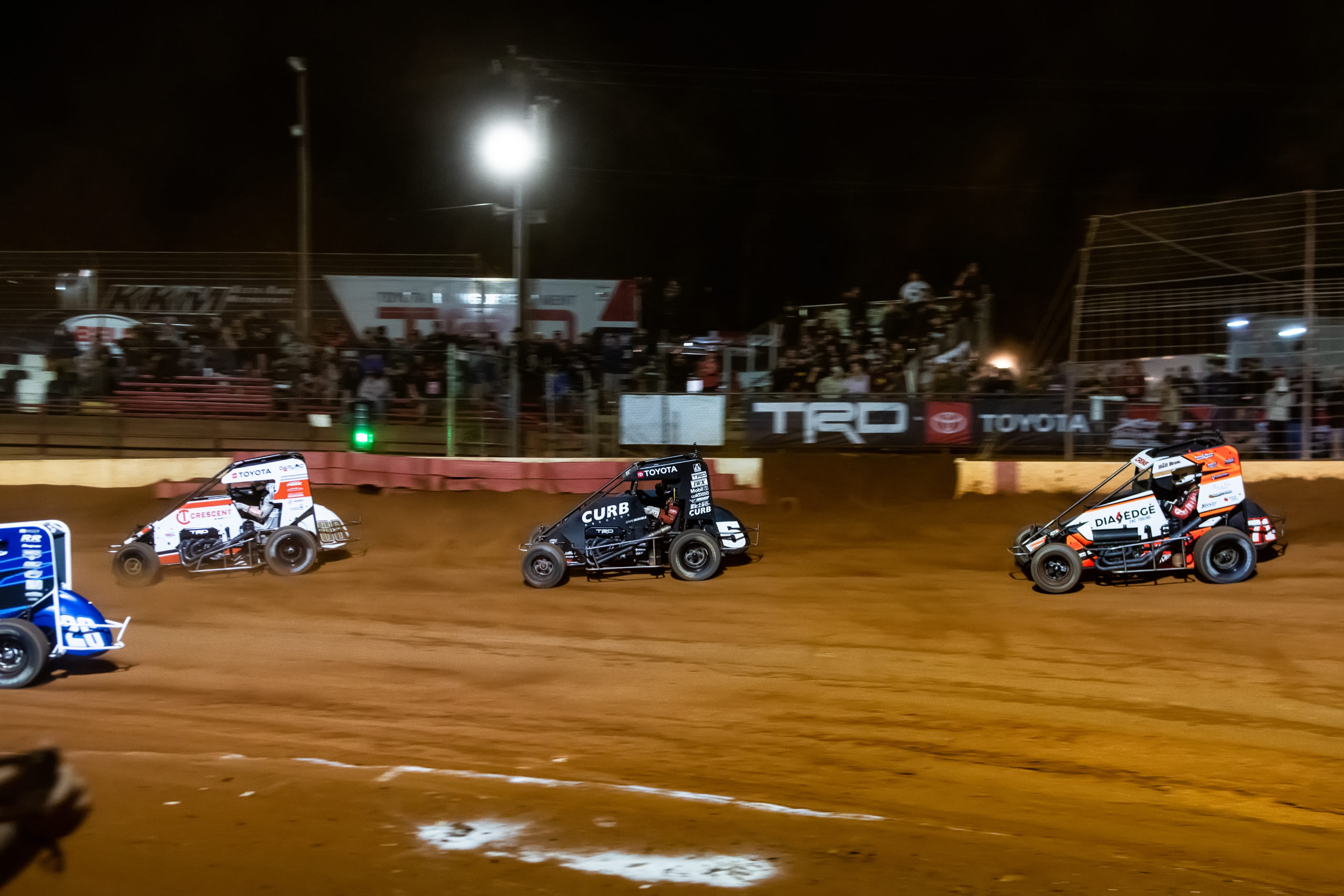 With five-to-go, things heated up as McIntosh & Boschele, who won Tuesday’s debut in the Keith Kunz/Curb-Agajanian Motorsports, Curb Records, Bullet/Toyota #5, split the middle and took the lappers three-wide with some spectacular sliders. It then became 1-v-1 as Boschele lined up McIntosh and tossed a slider his way to officially lead the 36th circuit.

A counter ensued, though, and McIntosh throttled up and slid right back across Boschele’s nose to regain command. That’s when the perception of the race changed completely as in a desperate attempt to get it back, Boschele bounced his right rear off the cushion, lifted the front end, and went flipping in turn three as his chance of doubling down vanished. Innocently collected in the mess was third-running Crews, left with nowhere to go in the Diaedge #71M.

From there, McIntosh handled a pair of restarts and four more laps to claim his first-career win with the Xtreme Outlaw Midget Series presented by Toyota.

“I didn’t know how close they were behind me, but I knew there was nowhere I could go,” McIntosh mentioned on the tight battle. “I was trying to sit on the bumpers as long as I could until I knew I needed to make a move in traffic. The minute I saw a lane open, I knew I had to take it. I was a little unsure how things would end once those sliders started, but obviously, Boschele got upside down. I think he was just driving it so hard, whereas I was just trying to keep my pace and not overdo it.

Bringing home a runner-up effort was Taylor Reimer of Bixby, OK in the Keith Kunz/Curb-Agajanian Motorsports, BUZZBALLZ, Bullet/Toyota #25K. With her second-place finish, she matched the best-ever finish by a woman in the history of National Midget racing.

“It means a lot,” Reimer said about the accomplishment. “I’ve been working hard these last few months and I’m finally done with school, so I can prioritize racing now. I want it bad. I know it’s gonna come soon, I will win a Midget race soon. It’s just gonna take some time. It’s so hard to jump in here against these guys on such a competitive level, but I’m a competitive person and I’m ready for the challenge.” 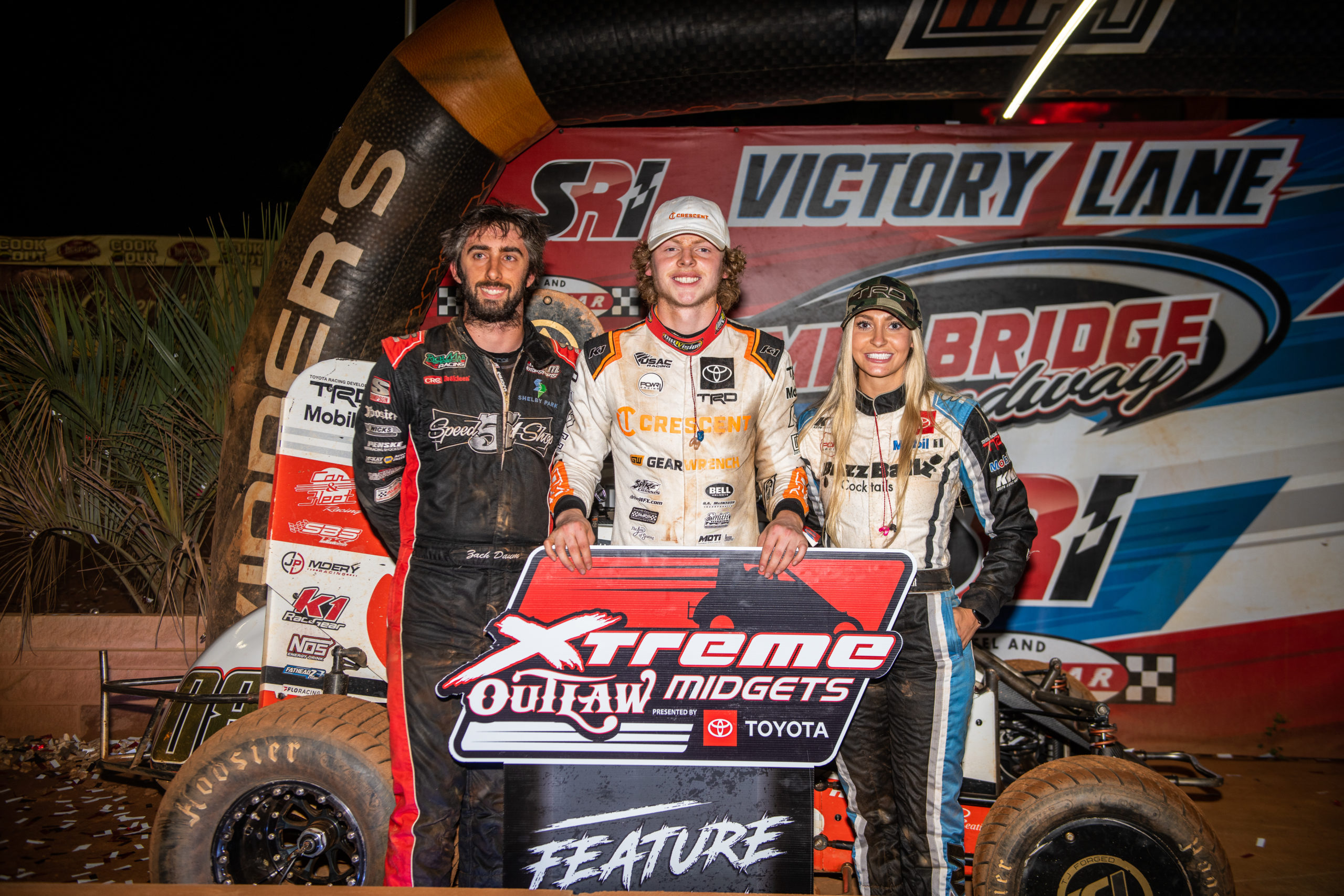 Leaving Millbridge as the Xtreme Outlaw Midget Series championship leader is Zach Daum, who claimed a third-place finish on Wednesday to become the only driver to finish on the podium in both shows aboard the Bundy Built #9M. His teammate Ethan Mitchell followed him in fourth place aboard another Honda-powered entry, while Bryant Wiedeman rounded out the top five.

Offering one last bit of late-race drama was Kyle Larson, who initially drove from 11th-to-6th before stalling on Lap 11, and then went 19th-to-3rd after restarting from the tail. The Hendrick Motorsports star was poised to offer some final restart theatrics in the CB Industries, Pristine Auction #86, but instead plugged the fence and went for a wild flip while trying to make the move for second.

Upcoming Events (June) – The Xtreme Outlaw Midget Series presented by Toyota will have almost exactly one month off until the 10-race mini-series resumes on Sunday, June 26 at Jacksonville Speedway in Jacksonville, IL. Prior to that, the Xtreme Outlaw Sprint Car Series presented by Low-E Insulation gets back on track on Friday & Saturday, June 10-11 at Lake Ozark Speedway in Eldon, MO. For those unable to attend, you can watch every lap LIVE on DIRTVision.