The wait is over. In his 43rd start across National Midget competition, Chance Crum finally earned his long-awaited trip to Victory Lane on Friday night at Federated Auto Parts Raceway at I-55.

Earning his much-anticipated win with the Xtreme Outlaw Midget Series presented by Toyota, held in conjunction with POWRi, Crum was forced to deal with a ferocious Karter Sarff all throughout the 30-lap opening leg of Ironman weekend.

The Snohomish, WA native rolled from the pole position thanks to a six-car inversion drawn by high point man Michael Pickens, and he quickly took advantage of the good fortune. After leading the opening four laps aboard the Rudeen Racing #26, Crum soon lost control of the top spot when Sarff, of Mason City, IL, roared by to pace the fifth circuit.

Sarff, a young but experienced 19-year-old, opened up his lead to as large as 0.969-seconds on Lap 12 before a caution changed everything with Crum able to regroup and refocus. Once back green, the duo offered a thrilling bout for the lead as they swapped the top spot on several occasions while racing each other and racing the tricky and treacherous 1/3-mile surface.

Crum officially re-took the lead with the cross flags waving on Lap 15, and although he never relinquished it over the second half, he also never built a comfortable lead. The gap was no bigger than five-tenths of a second throughout the latter half and Sarff constantly kept the heat applied with both drivers chasing their first-career Xtreme Outlaw Midget Series win.

The slightest of bobbles on the final lap made it even closer at the checkered flag as Crum slipped high and Sarff nailed the bottom to create a drag race to the line – a race won by Crum at only 0.303-seconds over Sarff.

“This is really special,” an elated Crum said in Victory Lane. “We’ve been so close this first National Midget win so many times, but we just haven’t even been able to get the job done. It’s kind of funny, because these track conditions are not my forte at all, either. It’s a testament to my dad [Kevin Crum], my brother [Hunter Crum], and Trevor [Reed] and how hard they’ve been working to make this car better.” 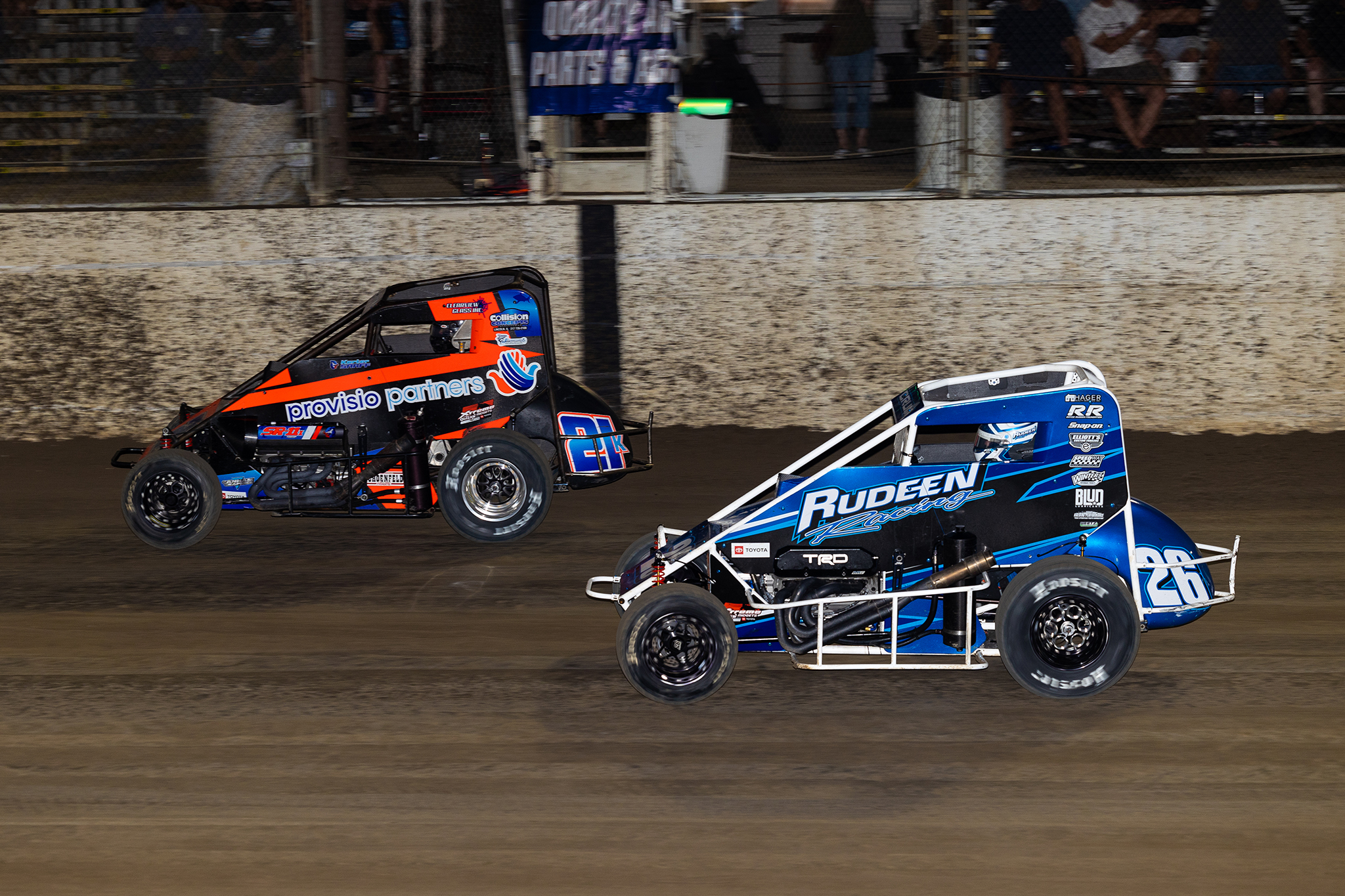 It’s a largely fulfilling moment for the Crum family, who moved from Washington to Indiana last year in pursuit of a bigger slate in the motorsports world. It’s also a payoff for Rudeen Racing, a nationally successful Sprint Car team that has entrusted Chance and his family with building the Midget division.

“Kevin and Monica Rudeen took a chance on me, and I can’t thank them enough,” Crum added. “We’ve been having a blast. It’s been a ton of hard work, but I think we’re starting to see it pay off. This new Series has been a joy to run and I’m thrilled to be out here competing against a field like this.”

Accepting a bittersweet runner-up result was Karter Sarff in his family-owned #21K entry. It was bitter to lead 10 laps and lose the win but at the same time quite sweet to turn the corner and produce a career-best effort at the Pevely, MO 1/3-mile. The up-and-coming star is chomping at the bit to get back on track tomorrow in hopes of some redemption with $5,000 on the line.

“I’m definitely disappointed, but this is the best run I’ve ever had at Pevely, so I guess you could say were’ improving,” an optimistic Sarff said. “I think we had the car to win it tonight, but we’ll have another chance to get it done tomorrow. Hopefully the track is somewhat similar and I can do a little better job on my part to get that win we deserve.”

Rounding out the podium in third place was Auckland, NZ native Michael Pickens, who enjoyed a series of firsts on Friday night. It was his first-ever Xtreme Outlaw Midget race, his first-ever appearance at Missouri’s I-55 Raceway, and his first-ever night driving for Dave Mac Dalby Motorsports.

“We got better and better as the long runs went on and the laps wound down,” Pickens noted, who will return to his native country on Monday. “I owe a huge thanks to Dave Mac Dalby for the opportunity to get into equipment this nice. I really want to close out this trip with a win, so hopefully we can get it done tomorrow night.” 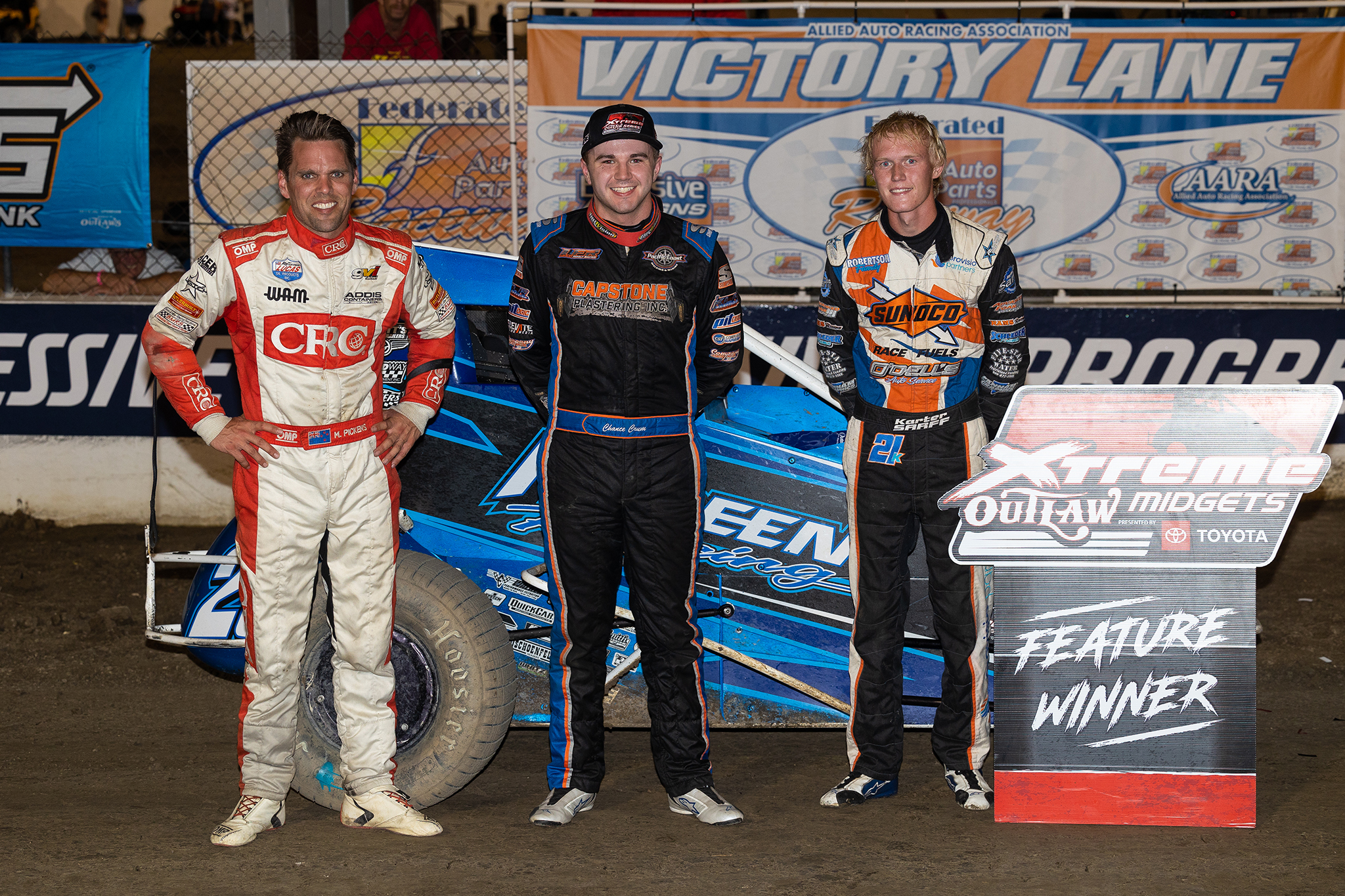 UP NEXT (Saturday) – The Xtreme Outlaw Midget Series presented by Toyota will conclude their portion of Ironman 55 weekend on Saturday, August 6 with a $5,000-to-win program, held in conjunction with POWRi, at Missouri’s Federated Auto Parts Raceway at I-55.