When we look back on the record books in 20-30 years, CJ Leary of Greenfield, IN will forever be the first winner in the history of the Xtreme Outlaw Sprint Car Series presented by Low-E Insulation.

Advancing from third to first in two laps, Leary finessed the middle of the Volusia Speedway Park 1/2-mile and shot by polesitter Carson Short in the early running. The 25-year-old Michael Motorsports pilot then survived a pair of restarts, a late rally by Short, and one final charge from Justin Grant to bank the $5,000 victory LIVE on DIRTVision.

“I’ve always wanted to run a Non-Wing car around here at Volusia,” Leary said in victory lane. “I came and got my ass kicked by the World of Outlaws a few years ago with the wing, so to come back and win a gator tonight is pretty cool. The place is a blast to race.”

The former USAC National Sprint Car champion will lead the star-studded 37-car field back to the Barberville, FL facility on Tuesday night with a $10,000-to-win DIRTcar Nationals Feature on tap for the newly-created Xtreme Outlaw Sprint Cars.

“This new Xtreme Outlaw Series is a great deal, and the timing is really perfect,” Leary acknowledged. “It’s awesome to see more non-wing races and more money available for us who have committed to the sport. Hats off to everyone behind this deal. We tried some stuff tonight and I think it worked, so I hope we can keep it up for $10,000 tomorrow.” 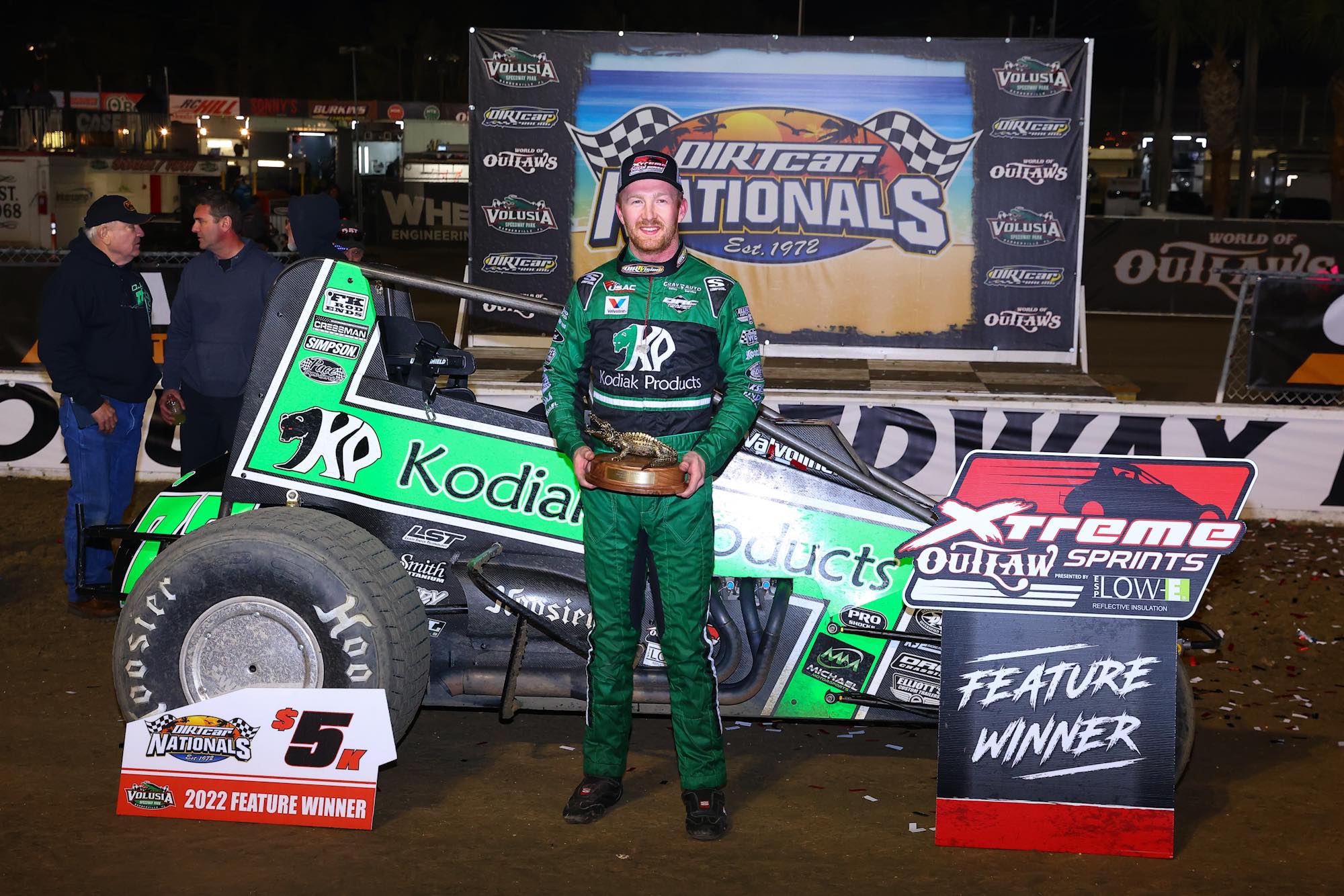 Chasing Leary to the line with a runner-up effort on Monday was Justin Grant of Ione, CA aboard the TOPP Motorsports, NOS Energy Drink #4. After starting fifth, JG fell back to seventh at the start but recovered quickly and made his way to the second spot by Lap 21. He continually took large chunks out of Leary’s lead with every passing lap, but the checkered flag cut his run short by 1.356-seconds.

“I spent a while tuning on the shocks and finally got it happy around halfway,” Grant noted on his Maxim #4. “We gave a couple of spots away early, but once we moved up the top we were really good. Just came up short at the end. We knew it was 25 laps when it started, so you can say five more laps all you want, but we need to get there faster.”

Closing out the podium was polesitter Carson Short of Marion, IL with a third-place effort. The former World of Outlaws NOS Energy Drink Sprint Car Series winner led the first-ever Xtreme Outlaw Feature lap, but he saw his bid for the inaugural win slip away when his #21 caught the front stretch wall trying to track down Leary.

“It’s just so hard to judge things starting up front, especially at a place we haven’t seen these cars at lately,” Short mentioned. “CJ was so good in the middle when he got by me, so I started his mimicking his line and made some ground. Once I hit the wall after the caution those guys ran away from me and I just hung on. We’ll work on it to go for the big money tomorrow.” 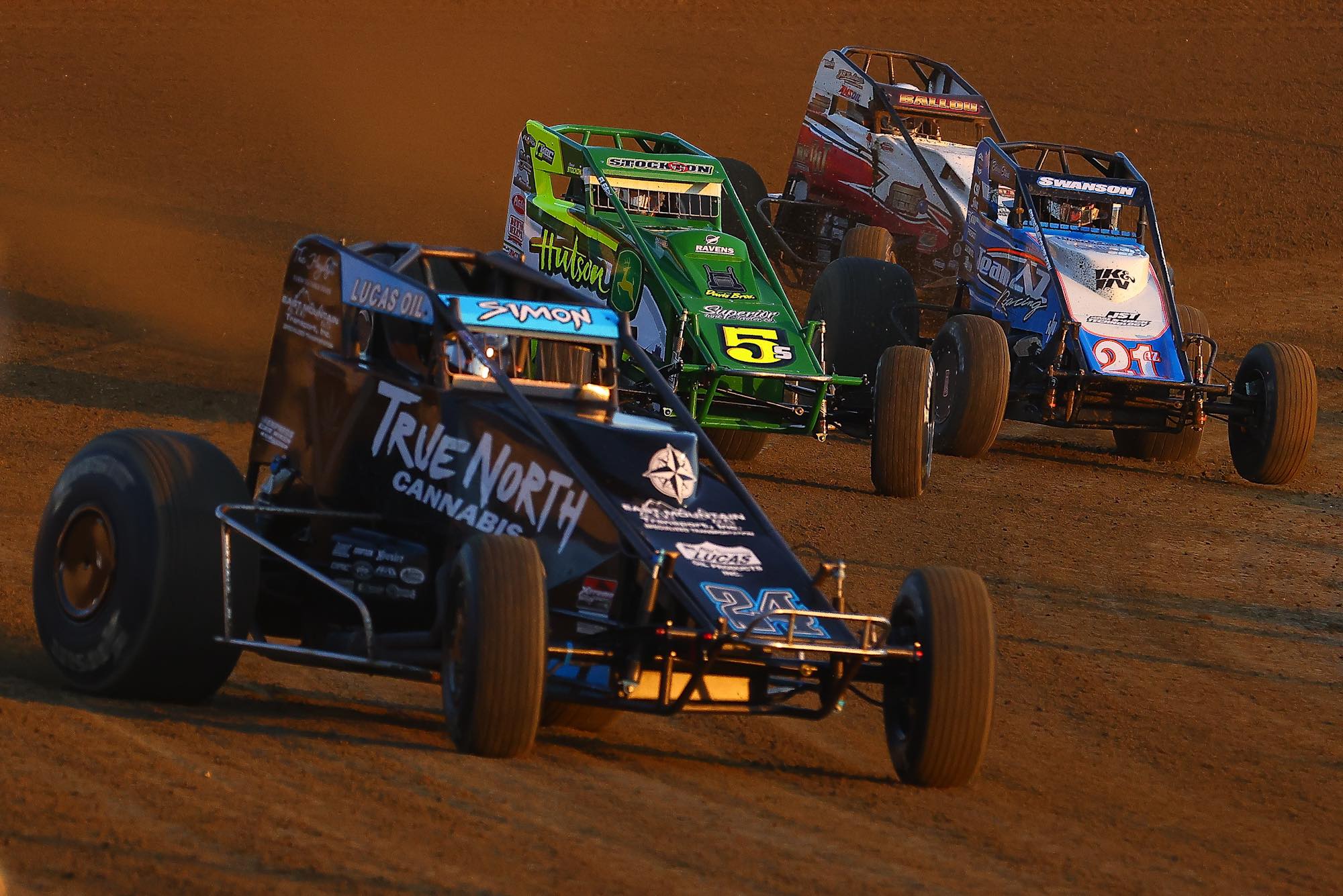 UP NEXT (Tues.) – The Xtreme Outlaw Sprint Car Series presented by Low-E Insulation will battle for a $10,000 prize in Tuesday’s appearance at Volusia Speedway Park in Barberville, FL.